It has been almost a month since super typhoon Yolanda cut a swath of destruction in the heart of the country, killing, maiming, destroying close to anything that was standing in its way. It came not too long after a similarly strong earthquake that claimed lives, livelihoods, heritage sites that were once the Boholanons’s source of pride of place.
Money, goods and disaster management specialists have poured into this country non-stop, all coming from big-hearted countries. Over here private citizens have themselves formed brigades and to move alongside the government to get relief goods fast to the survivors and plan efficient ways in rebuilding and rehabilitating, efforts that will take more than five years.

The vulnerability of children and women in disaster situations is one of the prominent concerns nowadays. Not only have natural calamities turned them into victims, they can be victimized a second and harsher time by manmade factors among which are the presence of human traffickers and similar predators who take advantage of these women and children’s situation.

Someone like Lourdes Almeda Lopez Sarabia, the second executive director of Gota de Leche who served until her death in April 2011, is a beacon of light in these times. Like her mother, Natividad Almeda Lopez, before her, she made the plight of the vulnerable her concern apart from family life. Whether they were the women and children who availed of Gota de Leche’s supplemental feeding program or women and children she saw begging for alms on the streets, their conditions inspired her to move and act in a way that would not diminish their dignity.

This is why Tita Lulu, as this writer learned to call her, is remembered with a rueful smile. Below is a blog post that I had written as my tribute to her while she was confined at St. Luke’s Hospital in Quezon City.
News of her passing reached me in April as my youngest sister and I accompanied my daughter, who had just given birth to my first grandchild, for the trip back home to Pasig from Capitol Medical Center.

Tita Lulu (Lourdes Almeda Lopez Sarabia) has been part of my life since the years when her eldest daughter Anna Leah still had a de Leon appended to her name. Like Anna, I’m a Daddy’s girl so it was easy for me to relate more with her father Injun than with Tita Lulu.

Tita Lulu is a larger-than-life figure (she’s taller than the average Pinay of her generation, women born in the late ’20s or ’30s). Injun was handsome, charismatic, an activist, an unconventional thinker but most of all, a doer. He deserves a full-length piece so I’m not bringing him into the picture yet.

Tita Lulu used to frighten me at their old house on Maranaw street, La Vista Subdivision, Quezon City, partly because she reminds me so much of my mother (formidable and intimidating). So it was Injun I became barkada with. I sometimes made small talk with Tita Lulu in their living room when she was present. Once I looked at her comfy-looking sandals and asked, “They look nice and comfortable. Where’d you buy them, Tita?”

She stretched out her legs to their full length and barked at me (she was a heavy smoker then so her delivery of lines was not only blunt but gruff): “Ten dollars in New York!”

Once, Anna left her very young daughters in their lola’s care. One of them wouldn’t stop wailing. What Tita Lulu did (she was a hospital administrator then) was to make the child swallow a Valium pill. That stopped the crying. But can you imagine the reaction of the parents’ child? I still laugh when I remember that.

Well, Tita Lulu is not in the best of health these days. Before she became ill and weak and attached to an oxygen tank, she’d drive to work from her Sikatuna Village townhouse to Gota de Leche building on Lepanto Street, Sampaloc, Manila, and work a full day. She kept that charitable organization that feeds malnourished children going after her own mother, Natividad Almeda Lopez, died in the ’70s.

Anna recently asked me to do her mom’s portrait. I gave many excuses why I couldn’t do the job, and I only relented when she accepted my terms so it could be finished fast and presented to Tita Lulu at the hospital: that the brushes, canvas and a set of basic paints be provided, that Anna’s grandchild Raya Sidhi be involved in the initial sketching and that I bring in Norman Chow, my painting teacher in Baguio, to help me with the face because I really don’t do honest-to-goodness faces unless it’s a caricature or cartoon you’re talking about. Raya and I worked feverishly at the Araos residence at the UP Diliman campus one Sunday.

Norman was quite pleased when I brought up the unfinished canvas last week during a brief Baguio visit, and he was sympathetic even if Tita Lulu remains a total stranger to him. He has been care-giver to many family members, lately his mother. He lost his wife Frances and favorite daughter Cezanne to cancer.

On Monday evening, Anna, her daughter Sinag, Sinag’s daughter Raya and I went to a hospital in Quezon City to make the presentation. Tita Lulu gave a faint smile. A trace of her old self was there. She pointed at my head and asked me in that blunt fashion of hers: “Why are you wearing a hat?” I just said my head gets cold easily which is God’s truth.

And that’s the story of Tita Lulu’s portrait which now hangs on the wall to the right of her hospital bed. Thank you, Jerry and Melen, for the space, the light and refreshments, thank you, Norman, for your infinite patience with a slow student (as far as realistic portraiture is concerned). Thank you, universe, for letting Tita Lulu continue to touch our lives.

The holidays are expected to be pared down affairs for most of us. But for those affected by both the pandemic and recent typhoons, it… 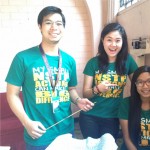 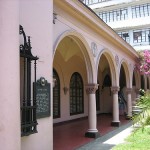 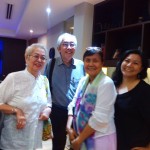