For many years, a statue of Our Lady of la Leche – a depiction of the Virgin Mary breastfeeding an infant Jesus – stood on what appeared to be a small version of a carroza meant for Holy Week parades. It was covered with a velvety fabric and had wheels, but it stood in a corner of the Gota de Leche administration office because it was too heavy to move around – being made entirely of metal and with no handles with which to push or pull. 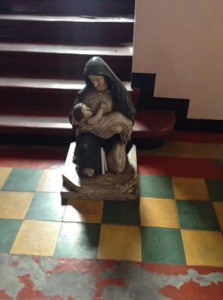 However, Gota de Leche’s Managing Director, Anna Leah Sarabia, had always known it was a vault. For as long as she can remember (and she is familiar with the Gota building and its nooks and crannies, being the daughter of Lourdes Sarabia, a former president of Gota), it has always been there in the premises.

“I’ve always known it was a vault, but my mother and I thought it was more of a safe with a combination”, said Anna Leah Sarabia.

There were previous attempts from both Anna Leah and her mother, Lourdes, to crack the “safe” open. Safe-cracker after safe-cracker was summoned, but all attempts to coax the vault to reveal its secrets was futile.

When asked if she had any idea if the vault contained anything of value, Anna Leah said no, but thought it was just too heavy to be dragged away to be sold as scrap metal during the Japanese occupation. So on the Gota de Leche premises it stayed, where it was eventually turned into a pedestal for the donated Our Lady of la Leche.

But how did the vault yield its secrets at last? A few months ago, Andoy Pajunar, a Gota de Leche staff member, summoned someone to help him attempt to open it for the umpteenth time. Andoy described the metal vault as airtight, with no obvious doors or hinges. It weighed several tons and was difficult to move around even with wheels. However, owing to previous attempts to unlock its secrets (and aided with proper tools), one of the vault’s metal sides finally fell open in late September. 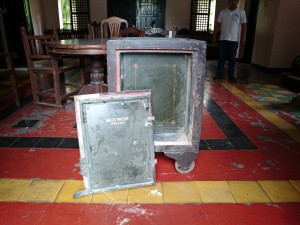 It turns out that Anna Leah’s grandmother, Judge Almeda-Lopez (another former Gota de Leche president), had a very good reason to keep the vault as airtight and impenetrable as it was for 70 years. Beyond holding valuable secrets for both the institution and its beneficiaries, the vault served as a precious time capsule with which to preserve Gota de Leche’s history and legacy. The vault itself bore the year 1906, the same year the institution was established. It is possible that the founders of La Protección de la Infancia, Inc. used the same vault to keep ledgers and files for safekeeping. 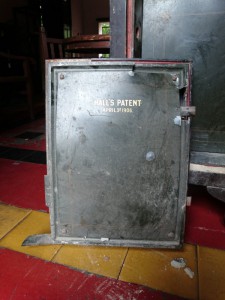 When it was Judge Almeda-Lopez’s turn to take over Gota’s upkeep – and consequently, its hardy vault – she had the foresight to cement its door before soldering it shut. Thus, its contents were kept safe from tampering, theft, debris and dust – and even a war that threatened to stop Gota de Leche from fully operating.

As for its contents, several Japanese government-issued currency were found intact, as well as piles of blueprints, vouchers, photographs, and documents of the time. A page of a newspaper called The Tribune, published 74 years ago, was also in the files. It has the headline “Gota de Leche Celebrates Its 35th Anniversary Today” – effectively contributing to a time capsule meant to share information on how the institution operated in the time of war. One of the stories had a photo collage of two babies and a mother and son, with a caption excerpt that said “Two generations: Baby Matilde Herrero and Baby Manuel Gaspar, both 1 year old. Both were fed by the Gota de Leche from the age of 2 weeks ’til over one year old, the first being the mother of the second.” The story perfectly described just how much help Gota de Leche has extended to malnourished children and their mothers, for many generations. 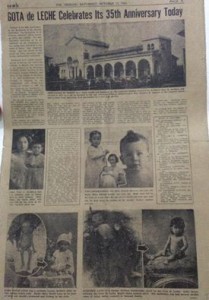 As for the rest of the contents which the vault kept secret for nearly a century? We will reveal them in a series of articles, because they have so much history and information on the milk of human kindness. Stay tuned.

Trinidad Rizal: The Heart of the Philippine Feminist Movement 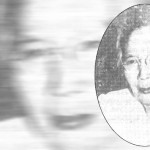 In 1888, a group of forward-thinking women challenged the convention that gave men better access to education. The group, which would later be called the… 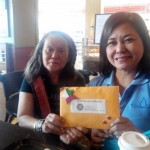